If you’re collecting coins from pocket change, then you’re probably wondering, “What kinds of coins can I find in circulation?”

While it is theoretically possible to find any legal tender coin in circulation — including old and even rare issues — the likelihood of finding such coins in your spare change is small (but not impossible). 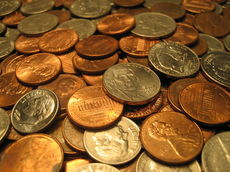 This brings us to remember that the grand majority of the coins to be found in circulation today are primarily:

Half-dollars have not been regularly seen in circulation in many years — but can be found at banks.

Dollar coins have yet to reach their circulation potential — many can be found at banks, some stores, and certain vending machines which operate for transit authorities and the U.S. Postal Service.

Pennies, nickels, dimes, and quarters commonly found in circulation are:

NOTE:  All the above denominations have yielded error coins (those which bear mistakes while being printed at the U.S. Mint) that can be worth anywhere from face value to thousands of dollars!

By the way, you may want to keep your eye out for foreign coins too — which occasionally pop up in U.S. circulation. It is highly possible to find Mexican coins in U.S. regions near the U.S.-Mexico border, and Canadian coins frequently turn up near the northern border and in other locations where Canadians frequently shop and visit.

Here are the most valuable coins in circulation that you should hold onto and not spend!

Are There Silver Coins In U.S. Circulation?

Looking at the list of U.S. coins above and their accompanying dates, you may realize that there is a rather limited range of available dates — especially the case with the dime and the quarter.

While Washington first appeared on the quarter in 1932 and the Roosevelt dime was first struck in 1946, it is improbable that you will find any of these early coins in circulation. The reason? They were minted from a 90%-silver composition, and these coins were virtually eliminated from circulation decades ago as hoarders, speculators, collectors, and others looking to hang on to these silver coins pulled them from circulation thanks to the rising value of the metal in these coins.

The same applies to silver half dollars and silver dollars of decades ago, too. The last silver dimes and quarters were struck in 1964. Hence, you will find that collecting these coins with dates from before 1965 is nearly impossible — if done solely from searching coins in circulation. While silver dimes and quarters do turn up every now and then, the availability of these coins from circulation is negligible.

Lincoln pennies first appeared in 1909. While pennies with earlier dates than those from the 1930s or 1940s can and do show up on occasion, issues from the early decades of the Lincoln cent series generally saw far lower mintages than those of the 1930s and especially those from the 1940s and later. These coins therefore became relatively much scarcer in circulation than the more recent pennies, which saw mintages of a billion or more by the mid-1940s. Any Lincoln cent dated from before 1959 is of the “wheat” back design.

Jefferson nickels debuted in 1938, but in a few short years would yield a variety of high intrinsic value due to the rationing of nickel for the war effort. To comply with ration codes, the U.S. Mint had to begin minting 5-cent pieces from a combination of silver, copper, and manganese. Silver Jefferson nickels, struck during 1942 through 1945, bear a large mintmark over the dome of Monticello, and thus are easily recognized from the regular Jefferson nickels which do not have a mintmark on the top half of the reverse. As is the case with silver dimes and quarters, silver Jefferson nickels are very difficult to find in circulation — though they do appear from time to time.

Keep in mind that modern-day circulation also yields coins like:

All of these coins were released into general circulation.

5 thoughts on “A List Of U.S. Coins Currently In Circulation”