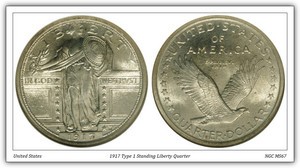 One of the most acclaimed quarter designs in history was seen on United States quarters made from 1916 through 1930.

The Standing Liberty quarter was designed by Hermon A. MacNeil.

MacNeil was a sculptor born in Chelsea Massachusetts.

Along with the Standing Liberty quarter, he designed many monuments, including the McKinley Memorial in Columbus, Ohio.

The Standing Liberty quarter was released the same year as the last Barber quarter, which was the quarter design from 1892 to 1916.

When many coin collectors first study up on the Standing Liberty quarter, they’re often greeted by a story of controversy.

MacNeil’s original design for the Standing Liberty quarter included a depiction of a bare-breasted Miss Liberty.

In fact, Miss Liberty was seen without any covering over her right breast on 1916 quarters and many 1917 quarters.

Popularly, the story goes that the public outcry against a bare Miss Liberty coerced the U.S. Mint to redesign the coin in 1917 to cover her up.  After all, it makes sense that much of the public in 1916 just didn’t want to have a picture of a bare Miss Liberty on the coins they were carrying around in their pockets! And what about the children?….

As many accounts go, the uproar over the 1916 quarter showing a partly naked Miss Liberty caused the U.S. Mint to have MacNeil revise the design so that Miss Liberty’s entire chest was covered.

How Much Are Standing Liberty Quarters Worth?

Standing Liberty quarter values vary based primarily on the date and the grade.

Many Standing Liberty quarters are common, even though they have not been commonly found in pocket change for decades.

*Values are retail prices according to the Standing Liberty quarter price chart at the Professional Coin Grading Service (PCGS).

Where To Find Standing Liberty Quarters

As you have probably come to know, Standing Liberty quarters are virtually non-existent in circulation. Sure, it is possible to find one, but if you do find one in pocket change or a bank role, luck will have been on your side!

So, how where do you find Standing Liberty quarters today?

You can easily find them at most any coin dealer who sells U.S. coinage or silver coins. Many coin dealers have brick and mortar stores, but many also sell online. eBay is another place to find coins, but be sure you know how to buy coins on eBay. Make sure you buy from a reputable seller.

What Came After The Standing Liberty Quarter?

In 1931, the U.S. Mint did not strike any quarters – the country was facing the depths of the Great Depression.

Personalized Coins & Custom Coins Are Fun To Collect, Make Great Gifts, And Are Smart For Businesses