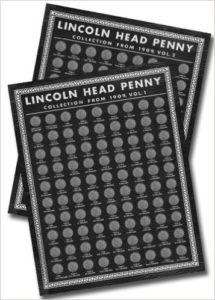 Collecting wheat pennies has been a national pastime since the 1930s, when the first penny boards were published by Whitman — the same company that sells blue coin folders and coin collecting guide books.

Penny boards pre-date modern-day coin albums and are one of the most influential developments in coin collecting because they sparked interest in date-and-mintmark collecting.

While coin collecting has experienced many changes since the 1930s, the revolution created by penny boards is still seen today.

In fact, in recent years, retro-style penny boards have been sold for coin collectors wanting to house their coins in old-school penny boards — just like those from the 1930s!

Why The Penny Board Is So Important

It’s really impossible to overstate just how significant the penny board is to the history of modern numismatics.

You see, before the first penny boards were invented by J.K. Post and published by Whitman, very few people collected coins by date and mintmark.

In fact, before penny boards, coin collecting was, in general, a much more-expensive hobby than it is today.

The reason? Most numismatists had little desire for collecting coins from pocket change.

However, with the advent of penny boards, collecting coins by date and mintmark from spare change (an endeavor which costs no more than face value) was seen as a fun pastime — and nearly as a game.

While the penny boards were perhaps the most popular of all cardboard coin collecting supplies at the time, there were several other coin boards available on the market in the 1930s:

At the time, all of these coin designs were commonly seen in circulation. In fact, you could’ve easily completed any of these coin collections back in the 1930s with enough searching. Imagine that!

The Progression Of Coin Boards Into Coin Folders

In 1940, the next advancement in coin collecting was made: the invention of coin folders.

While you may have never placed any coins into a coin board, you’ve almost certainly used coin folders at some point in your coin collecting pursuits.

Coin folders were invented to make the storage of coins a little easier and more compact than provided by coin boards, which measured in at 11 inches by 14 inches and generally were best stored in frames.

So, are you interested in going back to the roots of early date and mintmark coin collecting?

If you want to really protect your coins from exposure to dust, fluids, and other contaminants, it’s best to display your framed penny boards in areas of your home or office that aren’t exposed to direct sunlight, are generally cool and dry, and in a place without fumes.

The Controversy Behind The No-CENTS 1883 V Nickel (Like Other Racketeer Coins, The 1883 Nickel Has An Interesting Story… Or Two!)