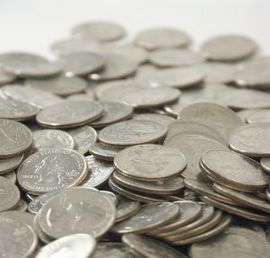 As pennies, nickels, and dimes seem to be playing less of a direct role in commerce (because prices keep going up, up, up), it appears that the U.S. quarter remains perhaps the most important and the most used coin in our everyday transactions.

Quarters are used in everything from toll booth payments to vending machines. And with only 4 needed to obtain a dollar, they remain among the most convenient coins to use.

Many numismatists love quarters. After all, not only do they represent a vital part of our economy and commerce, there are also many types (designs) of quarters that our nation has minted — keeping collectors busy and intrigued.

The first United States quarter was released in 1796.

Since then, the quarter has seen several design variations — not including the 50 State Quarters designs, which have been minted since 1999.

The 5 Main Types Of U.S. Quarters To Collect

There are many distinct designs and varieties of U.S. quarters — as listed above.

But suffice it to say that many “type” collectors break down the entire run of quarters to only the following 5 types:

When cost becomes a factor, coin collectors have the license to “custom-design” so to speak what they determine to be a “complete collection.”

The abbreviated list above is a common means of minimizing how many coins are needed to “complete” a type set — as all minor design variations are eliminated.

Values for these coins vary widely. I highly recommend you look through a price guide such as that offered by the Professional Coin Grading Service (PCGS) or in the very comprehensive and educational Guide Book of United States Coins by R.S. Yeoman and Kenneth Bressett.

I put together this video showing some of the rare quarters you can find in pocket change: