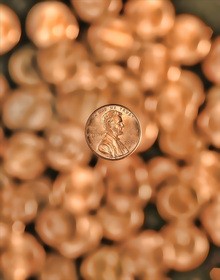 Have you ever noticed how coins have found their way into different sayings and phrases?

Take, for example, the simple penny… the bottom of the barrel when it comes to coins.

Because of its proud position as the first step in our monetary system, you can find it referred to in many different ways.

Some of the oldest sayings use the word “penny” as a way of identifying a minimal amount, low-cost  or limited value.

Here are some of the more popular sayings related to pennies, and what they actually mean…

Many times the word penny is just a description of something inexpensive.

For example, a penny whistle is a simple 6-hole woodwind instrument that is also known as a tin whistle.

Even modern-day phrases have incorporated the word penny as an indicator of low cost. One example is PennyTalk, IDT’s low-cost international calling cards.

Pennyweight is a measurement of “mass”  — 24 grains, or 120th of a Troy ounce. Penny weight is still used today by jewelers when measuring precious metals. The abbreviation is “dwt”.

Pinching your pennies implies a person who is a bargain hunter; one who is always trying to get a good deal.

A penny pincher is someone who uses coupons and other saving tactics religiously — to the point of being fanatical about reducing costs.

Penny wise and pound foolish implies that one’s efforts to manage money are a bit careless. This person carefully watches small expenditures while making unwise or foolish investments in large purchases. (An example: carrying bag lunches to save money while buying a large boat that you have neither the time or money to make use of.)

A pretty penny is the phrase used to explain how much something cost you, especially when that item was expensive or extravagant.

A penny saved is a penny earned refers to the idea that saving money is just as important as earning it. According to thrifty savers, a penny saved will grow (when invested properly).

If you’re experiencing a bad turn of events, then you might find yourself without two pennies to rub together.  It’s a common phrase muttered by those who tend to spend their money as soon as they get it. Thus, they never seem to have any cash in their pocket.

You’re in for a penny, in for a pound when a good opportunity finally comes your way and you decide to dive in with maximum involvement. This phrase is an indication that you’re willing to risk whatever you have in the venture.

Penny ante poker refers to a friendly game of poker when the players are not interested in risking much cash, and instead limit the game to small coins.

Maybe you’ve read the Penny Press — cheap tabloid newspapers that were available in the 1800s.

Then there are the Penny Savers. These are online classifieds filled with items for sale (automobiles, motorcycles, RVs, pets and more), as well as real estate, job listings, and garage sales in the local area.

“Penny” has been a common first name for girls going back many years. We can’t forget the little chicken who thought the sky was falling, Henny Penny from the old English fable.

Along these same lines, many characters have been named in honor of the lowly penny. For example, Penny Proud is an animated character on a television sitcom.

Of course, these are only some of the common phrases that have evolved from the simple penny coin. As I close this post, I imagine that you are sitting quietly in intense concentration as you’re reading this page, so I will offer a penny for your thoughts.

Another interesting read: The History Behind Popular Phrases That Mention Money

I’ve been involved in RVing for 50 years now — including camping, building, repairing, and even selling RVs. I’ve owned, used, and repaired almost every class and style of RV ever made. I do all of my own repair work. My other interests include cooking, living with an aging dog, and dealing with diabetic issues. If you can combine a grease monkey with a computer geek, throw in a touch of information nut and organization freak, combined with a little bit of storyteller, you’ve got a good idea of who I am.