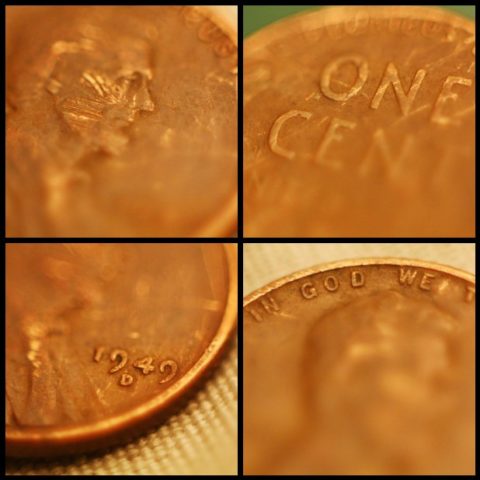 If there is one coin I have loved since I was kid, it is the Lincoln penny.

This versatile little coin has been struck by the United States Mint since 1909, and over the years has become one of the most popular coins in the whole world.

The values of many Lincoln cents far exceed their face value, making them highly demanded by both collectors and investors.

Like many coin collectors, I especially pursue Lincoln wheat cents, which have two stalks of wheat on the reverse side of the coin symbolizing national prosperity.

Which Lincoln Pennies Have The Highest Values?

You’ve probably heard about the 1909 penny made in San Francisco bearing the letters VDB, the initials of Lincoln cent designer Victor David Brenner.

The 1909 S VDB Lincoln cent is, in fact, one of the most well-known pennies — if not the most popular rare coin, period.

The 1909 S VDB penny has probably been on almost every coin collector’s wish list at some point in time, including my own.

And with a price tag of at least $900 to $1,000 even for a specimen in highly worn condition and a mintage of only 484,000, this key date Lincoln cent can seem out of reach for many of the millions of coin collectors who want one.

Another Lincoln cent with a high value is the 1922 plain cent.

While no Lincoln pennies were made at the Philadelphia mint in 1922, many collectors had originally thought the case to be otherwise when people started finding 1922 pennies without an apparent mintmark back in the day.

As it turned out, repairs to a die at the Denver mint (the only location to strike Lincoln cents in 1922) caused the D mintmark to be virtually obliterated.

The 1922 no mintmark Lincoln cent variety remains a popular collectible today and has a value of around $650 and up.

Another highly valuable Lincoln cent variety is the 1955 doubled die.

This penny is sought after by many coin collectors and has a value of around $1,200 and up.

While most were scooped up from pocket change by coin collectors many years ago, a few may still exist in circulation channels. I’m still trying to find one of these elusive coins!

The most valuable Lincoln cent, however, is an error coin that was minted in 1943 — the year the U.S. Mint struck over a billion steel pennies to save copper for ammunition efforts during World War II.

Around 30 copper penny planchets left over from 1942 penny production reserves were struck with a 1943-dated Lincoln cent die.

While the 1909 S VDB penny, 1922 plain cent, 1955 doubled die penny, and 1943 copper Lincoln all rank as among the most valuable old pennies, they are by no means the only ones worth holding on to!

In fact, there are many rare wheat pennies that are worth hundreds of times their face value, and a plethora of others that are worth $1 to $5 or more — even in well worn condition.

These key date and semi-key date Lincoln cents include the following:

The values listed above are for undamaged Lincoln cents in well worn condition. Examples in higher grades are worth considerably more.

Most other Lincoln wheat penny dates that are not listed above are worth less than a dollar in worn condition.

However, even if you have any of the more common Lincoln wheat pennies — such as those from the 1930s, 1940s, and 1950s — you will still want to hang onto them. These vintage Lincoln pennies are getting scarcer every day, and may eventually be worth more!

What’s The Lifespan Of A Coin? Find Out How Long Coins Last